Linseed or flax? They are the same!

But there can be some interesting differences!!

The cultivated plant is Linum usitatissimum. “Linseed” and “Flax” when produced as a food or supplement are both exactly the same thing (sometimes!). However the history of the plant, its uses and the marketing of the different names as healthfood in different countries have given rise to much confusion.

When it comes to food or health supplements in the UK the crop we grow is called “linseed”, which is why we still call our products linseed.

However when the North Americans produce linseed for human consumption they call it “flax” We are called Flax Farm to try to bridge the language gap.

The difference between linseed and flax 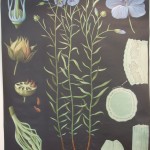 I have just typed into Google “two na” and it came up with: “two nations divided by a common language” This is especially true when it comes to linseed and flax

Both linseed and flax, for whatever purpose it is grown is the species Linum usitatissimum.  Within the species different strains the plant have been developed over its centuries of cultivation.

Linseed and flax in the UK

In the UK and most of the rest of Europe “linseed” is the term given to the strains of Linum usitatissimum which tend to have shorter stems, more and fatter seeds. The crop is left in the fields to ripen fully before harvesting. The plant has been grown mainly for its oil which has used for a variety of purposes including paint, varnish and oilcloth. A certain amount of the crop has always been eaten as seed and oil in various parts of Europe, Africa and Asia. North America also grows these varieties of Linum usitatissimum for oil but in North America they only call it linseed when it is going to be cold-pressed or used for human food. Europe always calls these varieties linseed and tells you it is a food by it’s packaging and the phrase “cold pressed”.

In the past in Europe “flax” referred to the fibre from the stems of Linum usitatissimum used for making ropes and linen fabric.  The varieties grown for making linen or rope fibre are called flax too.  Flax varieties have longer stems, produce fewer seeds and the crop harvested before it is fully ripe. “Flaxseed” was just the name for the seeds used for used for growing the crop for fibre. The seeds from this flax, because it is harvested before it’s ripe isn’t good to eat so usually fed to cattle.

Linseed and Flax in North America

As we know English and American English are not the same language but close enough to be really confusing in some areas, one of which is the naming of linseed and flax.

Just to add to the confusion the characteristic that makes linseed so good for preserving wood is that it is rich in omega-3 which is the main reason it is so beneficial for human health.

In North America they still have a huge industry growing linseed which mainly industrially processed for oil.  The same sorts of linseed are grown for making omega-3 supplements from the oil and the seeds used ground as a food for improving the digestion;  it is then called “flax”.

North America, just like the UK and many other countries in the world, also grows “flax” for the fibre which goes into linen and ropes, etc.

In the UK we have always called the fabric woven from flax fibre “linen”. In North America there has come a fashion for calling the fabric “flax” instead of linen.  Whatever it is called an excellent material for making comfortable clothing especially for hot climates.

Don’t buy you linseed oil from the hardware shop

Linseed oil for consumption by humans or animals should only be cold-pressed best quality seeds and used fresh within a few months of pressing. The linseed oil bought in hardware shops is pre-crushed and hot-pressed or even solvent-extracted all of which makes it unsuitable for people or their animals to eat – it might even be called “Raw Linseed Oil” but it’s raw in an industrial sense not a raw food!. It will be rancid and carry solvent and chemical residues.

However Flax Farm cold-pressed linseed oil will work well for most jobs like cricket bats, putty or woodwork.

Carefully pressed good quality cold-pressed linseed oil is often sold by farms and at local markets in many eastern European countries.  Linseed oil has always been a food to enjoy and to use for remedies.